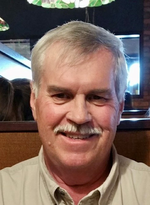 It would be impossible to sum up “the Big Guy” in a few sentences but those who know him will recognize the phrasing and grin, for those who don’t you’ll get the “gist”.
“Here’s the deal”, Brian Hennessy left us peacefully on Tuesday, March 29th, 2022 without an enemy in the world. Having “cowboyed up” against cancer over the last few years he led by example with courage and dignity to live and enjoy life, often saying he was “acrimonious” through the largest smiles and a wink. Brian’s big smiles and hearty laugh made everyone feel welcome, and the biggest smile he had was for the “beautiful woman over there” his high school sweetheart, “chickie-baby” and love, Suzie.
His legend looms large and so do his never-ending stories, most of them about days spent laughing with family and friends and running crews “turning crackles into tones”. Brian loved to listen to stories and had so very many of his own. Stories of his grandkids (Sydney, Cole, Josh and Case) were among his favourites, as much for the reactions of his kids (Kim & Steph and Jeff & Kim) as for the exploits themselves. “The thing of it is” Brian’s stories always taught you something and “the idea behind it” was if you were smart, you are a better person for it. Stories of “black hats and white hats”, working on the farm, days as a Quinte Saint and rising in the ranks at Bell.
Brian, the consummate family man, knew by 10yrs old to protect and care for his family (sisters Sandra (Harold), Barbara (Graham), brothers Robert, Doug, Murray (Darryll) and his parents Howard and Bessie) with a life spent playing everything for “the championship of the world”. “The favourite” to many, especially his in-laws (Claire, Robert, Vicky and Cal) and spending time with them at the lake in Quebec having fun and always helping with the various “accoutrement”. Uncle Brian was a hero to his nieces and nephews for promises of pony rides, ice cream for breakfast and taps of chocolate milk. Brian’s generosity was universal “any lesser man” wouldn’t have been able to “hack it”, sharing silver dollars won at the Quinte Exhibition with his sisters and brothers, giving “a taste” of any lottery winnings to Suzie, Kim and Jeff for “walking around money” or for something “smeesy smisy”. A teenage recording of him interviewing his family about “what they got from Christmas” and who gave them the gifts has him quoted as saying “That Brian Hennessy sounds like a really nice guy” a point no one can argue to this day.
Friends and co-workers were Brian’s second family. People who started as team and crew members became friends and some became brothers. Though Brian could lower the boom if he had to, he was a boss known for loyalty and fairness, bringing out the best in all those around him until every completed job was “F.M.”.
“Hold it,” he also gave strangers a giggle even through tough times, like telling the medical staff “I’m a screamer” with that smile on his face. “The high side” is that he leaves his sense of humour equally amongst all he has left behind.
As Brian always said, “Life is messy, it’s how you get through the mess” and he certainly did it well.
A celebration of Brian’s life will be held on Saturday, April 9th from 1:00pm-4:00pm hosted by his sister at her home at 215 Anne Street, Belleville.

All rights reserved. This obituary is also archived at obittree.com