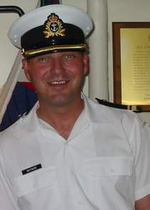 Lee was born in Belleville, Ontario in 1973 to Keith and Sheran. He went on to study at Queen's University with a degree in Commerce before earning a Masters of Business Administration from Saint Mary's University.

Lee was a proud member of the Canadian Forces having served from coast to coast. Most recently he was a member of the Cameron Highlanders of Ottawa and a Senior Analyst with the Department of National Defence. Lee was an avid traveller having visited Australia, the UK, Norway and Turkey. One of his most treasured memories was climbing Machu Picchu in Peru.

He is survived by his parents, siblings Daniel and wife Leona (Marlbank), Kristen (Trenton) and Penny (Brockville). Lee will
be fondly remembered by Colin, Lorraine and Regan of Halifax, John and Marcia of Dundas and Lee2 of Toronto as well as several extended family members and friends across Canada.

At Lee's request there will be no memorial service. His ashes will be returned to the sea in Nova Scotia.

Memorial Donations may be made in his name to Soldier On
295 Coventry Road, Ottawa, ON, K1A 0K2.

A lifelong fan of Winnie-the-Pooh, he loved the following words of A.A. Milne - "How lucky I am to have something that makes saying goodbye so hard.

All rights reserved. This obituary is also archived at obittree.com